The analysis so far has looked at broad trends within the whole sample of respondents and then looked at some of the different attitudes expressed by teachers working in the primary and secondary sector. Both appeared to show a divergence of views, which might be interpreted as polarised positions, relating to some of the arguments about pedagogy presented in the survey.

In this post, I want to examine in some detail some of the interactions between the gender of the respondent, the education sector they work in and how inclined they were towards progressive or traditional ideas about pedagogy. To do this, I intend to focus on just two of the six questions – and look at these in some detail.

Which questions have I picked?

For me, one of the abiding divisions within debates about pedagogy is whether minimal guidance or discovery is a more effective way for children to learn than guided or explicit instruction. These quotes perhaps typify this division:

“Our real problem is — what is the goal of education? Are we forming children who are only capable of learning what is already known? Or should we try to develop creative and innovative minds, capable of discovery from the preschool age on, throughout life?” Piaget (1971)

“After a half-century of advocacy associated with instruction using minimal guidance, it appears that there is no body of research supporting the technique. In so far as there is any evidence from controlled studies, it almost uniformly supports direct, strong instructional guidance rather than constructivist-based minimal guidance … . Not only is unguided instruction normally less effective; there is also evidence that it may have negative results when students acquire misconceptions or incomplete or disorganized knowledge.” Kirschner, P., Sweller, J., and Clark, R. (2006)

Question 1 asked teachers whether they felt more inclined towards one or the other position in this debate.

(A) Some teachers may argue that learning principally involves knowledge discovery and that this helps to develop the learning skills and commitment needed to become autonomous or life-long learners. Some may argue that students learn best when they discover or co-create knowledge for themselves.

(B) Other teachers may argue that the supposed benefits of learning by discovery transfer poorly between dissimilar contexts, the heuristic skills developed are too narrow for general application, and that important key discipline concepts are required before meaningful discovery can occur. Some may tend to argue that students learn best through explicit instruction.

A second frequent topic of debate is the structure of the curriculum. Should children be given much more freedom to pursue the topics and questions that they find personally relevant, or should we select bodies of knowledge and guide children through a curriculum that has been chosen for them. These quotes typify for me the opposite ends of this argument:

“In sum, anti-fact slogans … are misleading. Readiness to learn means already knowing a lot of what you are trying to learn. Learning to learn is not an abstract skill. It entails already having the preparatory knowledge that enables further learning to occur.” E. D. Hirsch (2000)

Question 2 looked at whether teachers felt more inclined towards one or the other position in this debate.

(A) Some teachers may argue that learning is best achieved when students are able to exercise choice about the curriculum content, as this provides an education that is more relevant and authentic to their personal background and interests. Some might argue that students should have a significant role in deciding the content of the curriculum.

For me, these two questions encapsulate a great many of the dividing issues within teaching – they represent very different sets of values about the purpose of education and very different ideas about what ‘great teaching’ might look like. These different philosophies were also reflected in polarised responses from primary and secondary teachers – making them ideal for further investigation. Therefore, the following analysis has focused specifically on these two items from the survey.

What did I expect to find?

For each question, I examined four interactions within the opinions expressed:

I was looking to see whether there was any evidence of a ‘gender effect’ within attitudes towards pedagogy, and how this might compare to an ‘institution effect’. 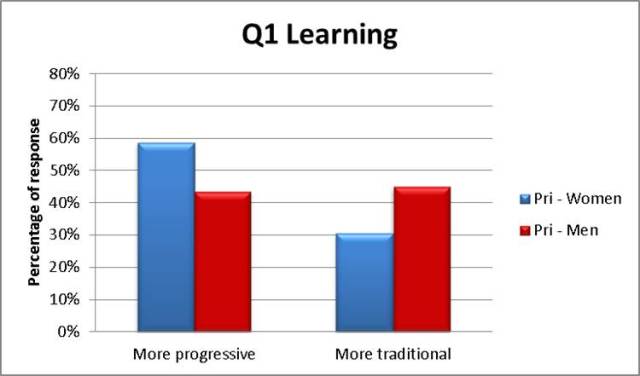 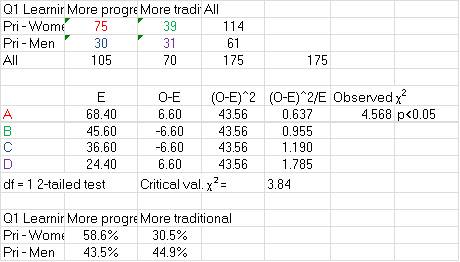 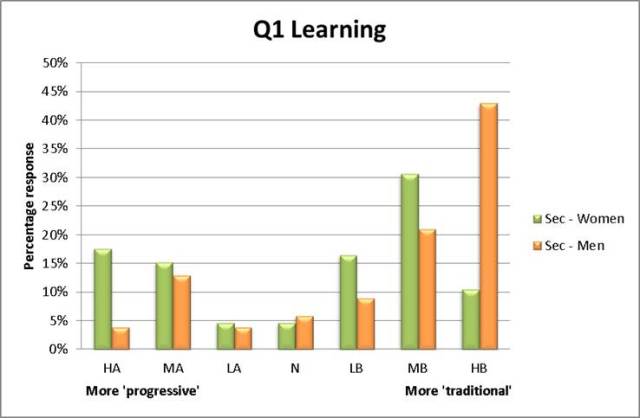 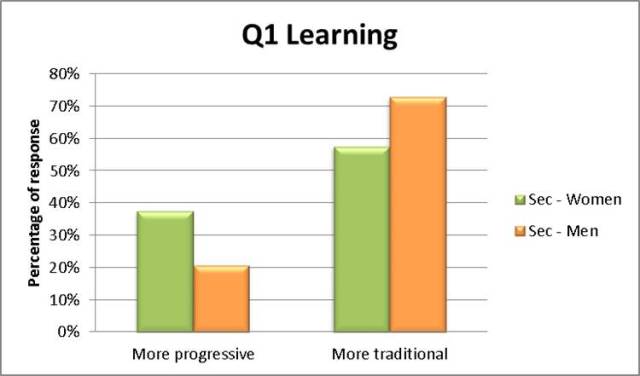 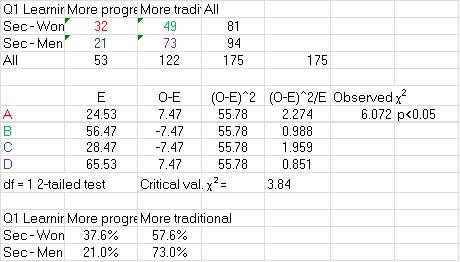 3. Female teachers in primary and secondary 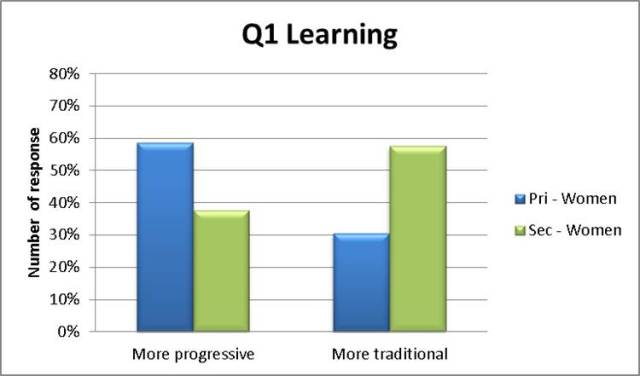 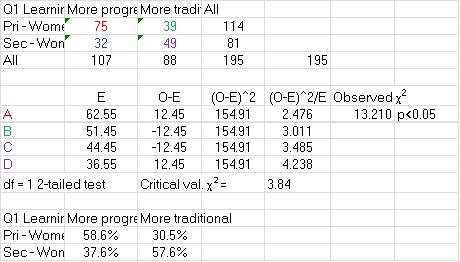 There appeared to be a fairly clear division of opinion when comparing female teachers in primary and secondary settings. Women in primary were more inclined to the ‘progressive’ position, whereas women in secondary were more in favour of the ‘traditional’ option.

4. Male teachers in primary and secondary 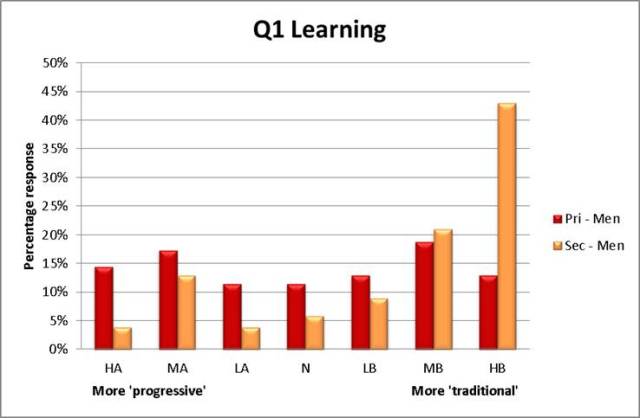 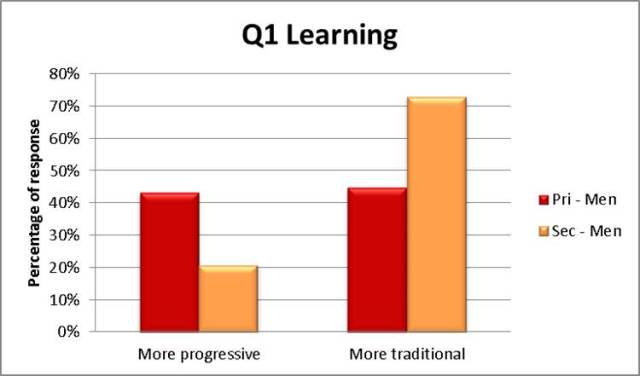 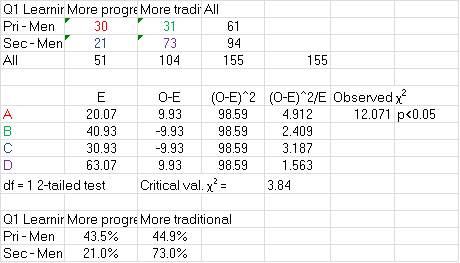 Once again, there appeared to be a fairly clear division of opinion when comparing male teachers in primary and secondary settings. Males in secondary were more in favour of the ‘traditional’ option compared to males in primary. 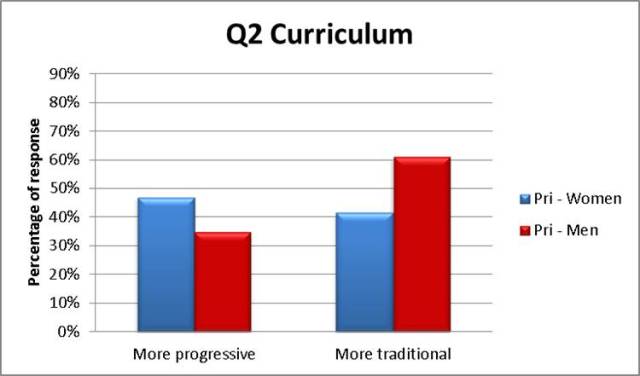 Whilst there is some polarisation in the distribution, both male and female secondary teachers were more strongly inclined towards the ‘traditional’ end of the response options. There was a small, but measurable split between male and females in secondary, with males being marginally more ‘traditional’ in their responses and females marginally more inclined towards the ‘progressive’ option.

3. Female teachers in primary and secondary

There appears to be some polarisation of opinion for female teachers in both primary and secondary. However, there was a fairly large difference between the two groups, with female secondary teachers considerably more ‘traditional’ in response and female primary teachers more ‘progressive’.

4. Male teachers in primary and secondary 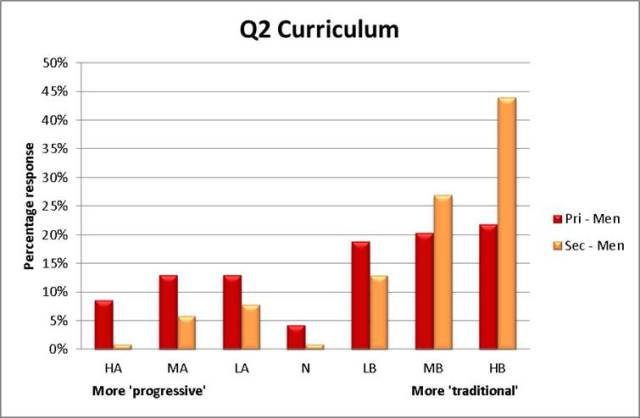 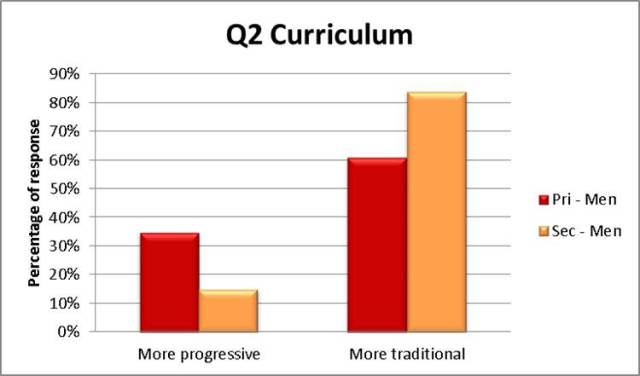 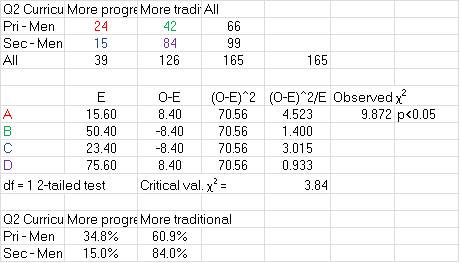 Some tentative conclusions for now …

As I’ve said before, the sample gathered from Twitter is unlikely to represent to broader population of UK teachers, but within the sample there did appear to be some interesting divisions of opinion worth trying to understand.

Is there an institution effect? Yes, in this survey the differences in opinion between primary and secondary teachers does not appear to be simply a ‘gender effect’ – women in secondary were more ‘traditional’ in their responses than women in primary, and men in primary were more ‘progressive’ than men in secondary (who were very ‘traditional’ in their responses). It also looks as if the influence of institution may be a stronger influence on opinion than differences in gender.

It’s impossible to say ‘why’ these effects appears to exist in the sample: The survey can’t tell us the causes. (inevitably I will go on to speculate a bit – it’s an academic tradition!)

Perhaps the gender effect derives from some combination of biological and social differences; perhaps there is some basis for the idea that the language of ‘traditional education’ is slightly off-putting (at least for some women). Whatever the reason, ‘progressive’ education appears slightly more appealing for women; and ‘traditional’ education more attractive to men. This has some interesting potential implications for education reformers and organisations like the College of Teaching seeking to represent the profession. The gender balance on professional bodies and working groups has been something of a focus recently – and perhaps this small ‘gender effect’ in ideas about teaching gives a potential clue why this has been such a contentious issue.

It looks, however, like there’s a fairly strong influence coming from the institutional setting of the teacher. It may have more influence than gender, but at the very least appears a separate factor to gender. It’s interesting to wonder whether this influence comes from ‘importation’ factors (e.g. individuals with a more progressive outlook joining primary teaching) or ‘social norms’ arising from differences in the institutional settings (e.g. a conformity effect or ‘signature pedagogy’ within the different institutions shaping the views of both males and females who work within them).

In the next post, I intend to look at whether positional responsibility (classroom teacher, middle leader or senior leader) had an influence on the views expressed in the survey.

1 Response to Results and analysis – Part 3