In this post, I want to look at one of the possible sources for the divisions in opinion found in the first part of the analysis. One possibility is that there exists very different approaches to pedagogy dependent on which age group a teacher predominantly works with.

Two groups of interest are primary versus secondary teachers. 384 respondents identified themselves as either working in a primary school or secondary school setting. 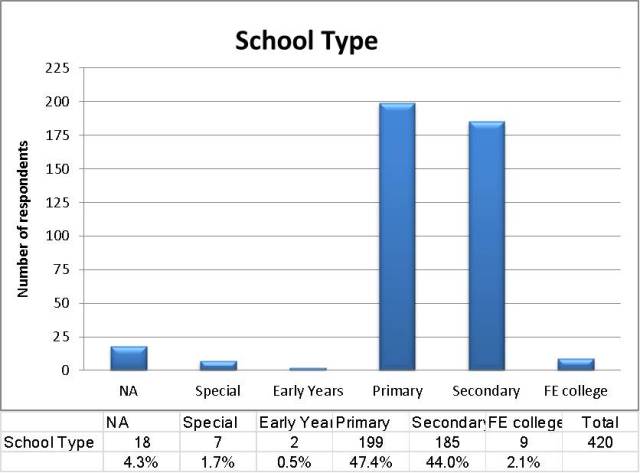 The following analysis is restricted to these groups.

What did I expect the survey to show?

As in the first analysis, I expected to find differences in the patterns of responses depending on whether there was a broad consensus, a continuum or a polarisation of opinion about pedagogy. I wondered whether there would be more agreement within teachers working in the primary or the secondary sector?

Secondly, I’ve often thought that many of the more highly charged debates around pedagogy occur between teachers from different sectors of education. I wondered whether something underlying these arguments was whether teachers in the primary sector hold more ‘progressive’ views about teaching whereas teachers in the secondary sector tend to be more ‘traditional’ in outlook. For each question, I carried out a simple two-tailed chi-squared test to compare ‘progressive’ and ‘traditional’ views between primary and secondary respondents.

Please note a strong caveat regarding this sample. I cannot say it necessarily represents the position within the broader population of teachers.

So … come on … what were the differences between primary and secondary already?!

(A) Some teachers may argue that learning principally involves knowledge discovery and that this helps to develop the learning skills and commitment needed to become autonomous or life-long learners. Some may argue that students learn best when they discover or co-create knowledge for themselves.

(B) Other teachers may argue that the supposed benefits of learning by discovery transfer poorly between dissimilar contexts, the heuristic skills developed are too narrow for general application, and that important key discipline concepts are required before meaningful discovery can occur. Some may tend to argue that students learn best through explicit instruction.

Here is the distribution of responses to this question. (click on images to enlarge them) 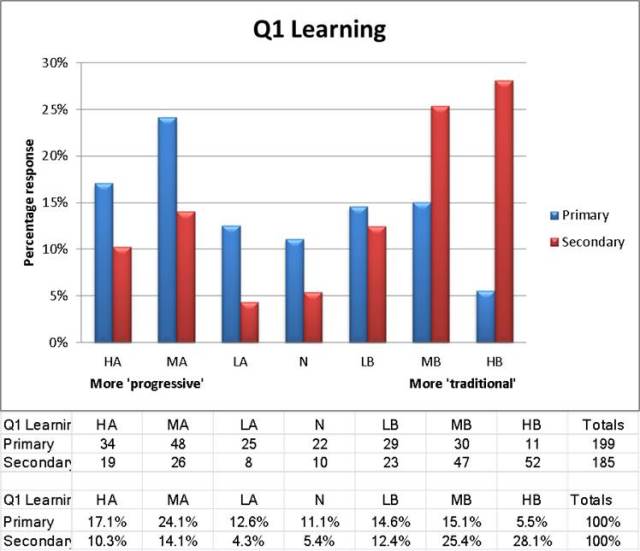 To me this looks like a polarisation of opinion within secondary respondents, with more opting for the more traditional view. For primary, there is also a polarisation in opinion, but more skewed towards the progressive view.

(A) Some teachers may argue that learning is best achieved when students are able to exercise choice about the curriculum content, as this provides an education that is more relevant and authentic to their personal background and interests. Some might argue that students should have a significant role in deciding the content of the curriculum.

Here is the pattern of responses:

Again, to me this looks like there’s a degree of polarisation of opinion within both primary and secondary teachers. For secondary, there’s a strong bias towards more traditional ideas (teacher selects content). For primary, however, it looks like a fairly even split between the traditional and more progressive view (students select more content).

(A) Some teachers may argue that learning is best achieved when students learn within discrete subject areas (such as English, Maths, Art or Geography). Some might argue that specialised subject knowledge is one of most important competencies of an effective teacher.

(B) Other teachers may argue that learning is best achieved when students engage in learning based around cross-curricular projects rather than traditional subjects (e.g. Life in Roman times). Some might argue that specialised subject knowledge is a relatively unimportant competence for an effective teacher.

1 respondent skipped this question. Here’s what the survey responses look like: 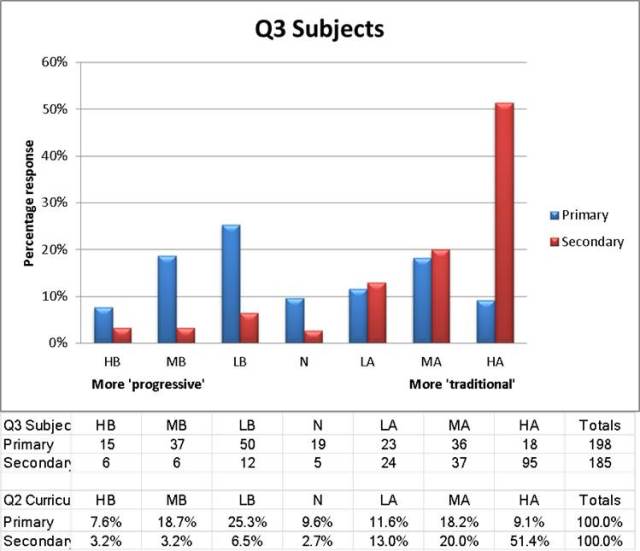 Here, I’d say there’s a broad consensus among secondary teachers, but some polarisation of opinion among primary teachers. Secondary teachers were very strongly biased towards teaching in individual subjects whereas there was a slight bias towards project / cross-curricular approaches in primary.

Yes – for secondary teachers the is a predominantly positive view of subject teaching compared to more mixed opinions, slightly biased towards a more ‘progressive’ view, for primary.

Question 4 asked whether students working in groups or principally focused on the teacher was better for learning.

(A) Some teachers may argue that learning is best achieved when students are mainly focused on the teacher rather than engaging with their peers. Some might argue that seating children in rows facing the front facilitates this and leads to more effective learning.

(B) Other teachers may argue that learning is best achieved when students are able to socially learn from each other in groups rather than mainly focused on the teacher. Some might argue that seating students around tables where not all students are facing the front facilitates this and leads to more effective learning.

I think this is quite interesting. To me this looks like something of a continuum of views within secondary teachers (skewed towards the more ‘traditional’ approach) – and conversely, a broad consensus in favour of a more ‘progressive’ approach within primary. 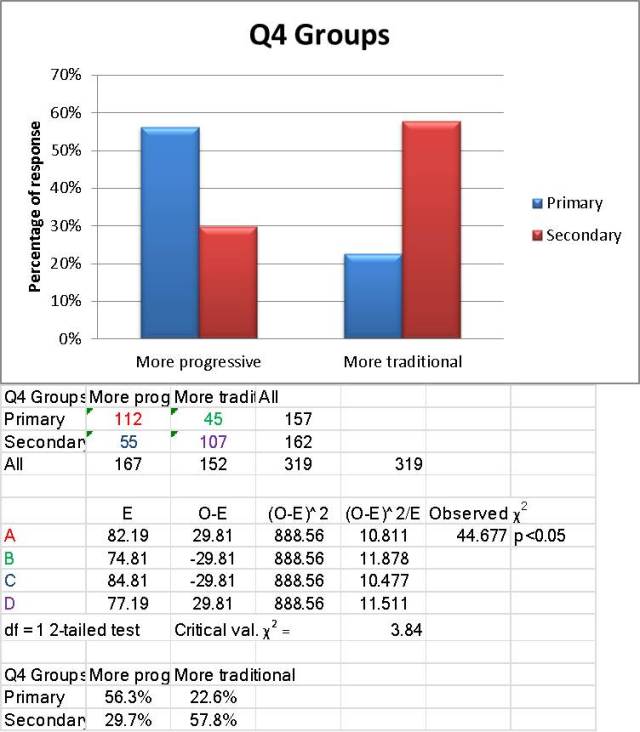 (A) Some teachers may argue that learning is best achieved when lessons are creative, pacey and varied, drawing often on practical or social activities. Some might argue that engagement strategies are key to students’ motivation to learn.

(B) Other teachers may argue that learning is best achieved when lessons are focused on consolidating the recall of key knowledge, understanding and skills. Some might argue that mastery of content is key to students’ motivation to learn.

2 respondents skipped this question. Here’s what the remaining sample said in the survey:

Again, I think this is quite interesting. It looks to me like there’s a continuum of opinion within secondary (skewed towards traditional) and a similar continuum for primary teachers (but more heavily skewed towards progressive).

Yes, this time the primary teachers were more starkly in favour of the more progressive option (engagement strategies) whereas secondary were biased towards the more traditional option (mastery).

Question 6 asked about differentiation strategies and whether this implied simply more practice or planning for specific individual needs.

(A) Some teachers may argue that learning is best achieved when lessons are focused primarily on developing the key knowledge, understanding and skills required of the content. Some might argue that effective differentiation means recognising that some children will need more modelling or practice than others.

2 respondents skipped this question. Here’s how others responded: 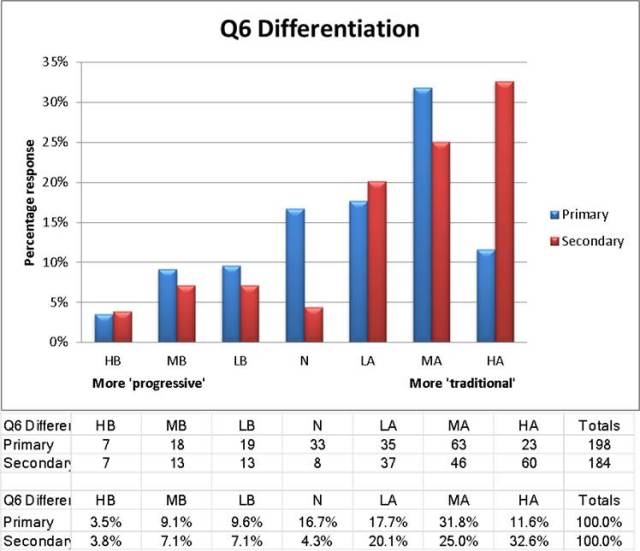 No – for this question, it appears that teachers in primary and secondary setting broadly hold more similar views about the differentiation strategies presented in the survey.

Some tentative conclusions (so far)

In general then, it seems that secondary sector teachers more typically hold more ‘traditional’ views about teaching than primary teachers for a range of common arguments about pedagogy. Primary teachers, on the other hand, appeared more divided between ‘traditional’ compared to ‘progressive’ approaches – especially for questions about curriculum and subject specialism – however, they appeared to broadly agree with secondary teachers about differentiation.

These apparent differences may explain why arguments often appear quite intense between secondary and primary teachers. I’ve heard primary teachers complaining of being ‘lectured to’ by secondary teachers – and conversely, secondary teachers ‘despairing’ of some of the views about teaching held by primary teachers. There appear some marked differences in opinion between these two sectors – and this might have implications for a professional body seeking to represent professionals from both sectors (e.g. the College of Teachers). For example, perhaps it would be a mistake to believe that a ‘professional knowledge base’ that met with broad approval within one sector would be well-received within the other. Additionally, a question might arise whether ‘teaching standards’ developed within one sector could easily be applied within the other without alienating a significant number of teachers.

On the other hand, there was a fairly large demographic difference between the respondents from the primary and secondary sectors. There were more women represented within the primary teachers and fewer women within secondary. 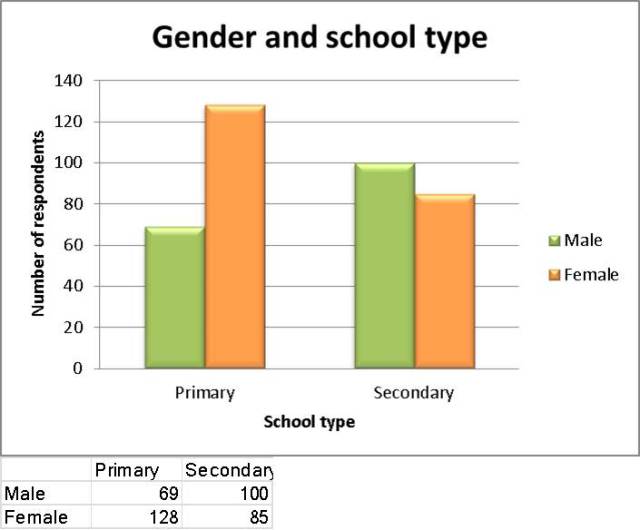 Some bloggers have argued that ‘traditional’ perspectives about education have been characterised by terms they consider to have more masculine gender properties. Without wishing to become embroiled in the, sometimes quite heated, arguments about the influence (or not) of masculine language (or not) on people’s ideas about education (or not); could some of the apparent split between primary and secondary teachers’ opinions about pedagogy be due to some level of gender division in attitudes?

One way of exploring that idea would be to separately examine male and female respondent opinions within the primary and secondary sectors. This will be the topic of the next post.

1 Response to Results and analysis – part 2